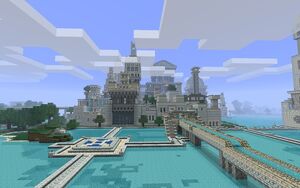 The ancient acropolis was located in the Ancient City. After the Hanging Gardens, it was likely the first building built on the server, built even before the map was a server. It consisted of a large jumble of platforms, all piled ontop of each other. These platforms were covered in stairs, tiny canals, and towers, even including one pagoda. At the very top was a large Parthenon-like structure, containing the throne. On the back side was the second hanging garden attempt by San. Between the throne structure and the garden structure was a sunken pit with a stone gate thingy.

The hill before the acropolis was built

An iconic view of the acropolis, the heart of the ancient city

Some of the aqueducts and towers

The throne building on the right, 2nd hanging gardens on top left, pagoda on bottom left

The stone arch between the throne building and 2nd hanging gardens

Some of the towers, canals and stairs

The acropolis in the background

Throne building at center, pagoda at left, after being copied to the Golden City

The iconic view, after being copied to the Golden City
Add a photo to this gallery
Retrieved from "https://minecraftgoldencity.fandom.com/wiki/Ancient_Acropolis?oldid=7847"
Community content is available under CC-BY-SA unless otherwise noted.