Forgeheart's City Walls are the largest structures in the city, which they surround. They are about 60 blocks high and 100 block wide. While the inner wall forms an almost complete circle – the only gap is in the southwest of the city, where the Grand Canal enters a river outside the city – about 60% of the outer wall were removed or replaced by more natural-looking hills and mountains. Currently, the outer wall covers only the east side of Forgeheart and about half of the south side.

Initially, it was planned that the area between the two walls would be spilt into four districts: the Industrial District in the east (the only one that was implemented and is now almost complete), the Garden District in the south, the Merchants District in the west, and Chinatown in the north. A miniature version of the plan can still be seen in the basement of Sanacraft History Museum.

While there will be countless buildings on the walls in the future, the most prominent structures are the Four Castles that sit on top of the outer gate houses except for the South Castle, which sits on the inner gate house.

Diagram with dimensions in blocks

Buildings on the eastern inner gatehouse

Sere's Village on the inner wall 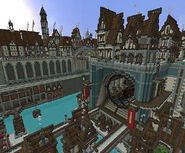 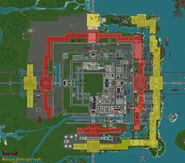 A diagram showing the layout of existing walls (outer wall in yellow, inner wall in red)
Add a photo to this gallery
Retrieved from "https://minecraftgoldencity.fandom.com/wiki/Forgeheart_City_Walls?oldid=7103"
Community content is available under CC-BY-SA unless otherwise noted.